Saved Searches Advanced Search
Plan your visit: see current hours and visit our Library Express page for updates on services available, locations, and what to expect when you arrive.
Print 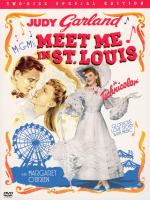 Meet Me in St. Louis

Alternative Title: Making of an American classic
Hollywood : the dream factory
Becoming attractions : Judy Garland
Boys and girls like you and me

Judy Garland belts out a moving rendition of "Have Yourself a Merry Little Christmas" in this classic, which highlights not only Christmas but a calendar full of holidays. (B.A.)

Poignant, funny, musical. A perfect film by Minnelli. And Judy sings! A grand story of family life in early 1900's St. Louis. Something for everyone.

I don't get how this is a Christmas classic. Good costumes and some nice songs, but a classic? Barely anything Christmas about it (except for the lovely song Have Yourself A Merry Little Christmas). The children talking about killing or being killed and the utterly obnoxious Tootie and her obsession with death turned me off completely. Glad I didn't buy it.

I've loved this movie since I was a kid. I watch it every year at Christmas. The movie follows a year in the life of the Smith family, broken into four vignettes (one for each season). "Have Yourself A Merry Little Christmas," "The Trolley Song," and "The Boy Next Door" are the stand-out hits .. but my favorite was always "Skip To My Lou" and "Under The Bamboo Tree." Do take the time to watch the DVD Extras, especially the TMC "Becoming Attractions," which gives you a 30-minute run-through of Garland's career via her movie trailers.. and the "Meet Me In St. Louis" Television pilot from 1965. I had never heard of this pilot before. Obviously it was never picked up, but the full episode is included, and it's quite amusing to watch!

A bit light - but lots of fun. Judy Garland was 22 at time - and looks great! The two quirky younger sisters were rather fun. Amusing Hollywood view of a family during a variety of holidays.

I'm not a huge fan of musicals, so maybe I shouldn't be reviewing this. It is ranked among the best, released by MGM in 1944, and starring Judy Garland in one of her most celebrated roles (right up there with Dorothy and the actress from "A Star is Born"). Vincente Minnelli directed Garland and they married (one of Garland's 5 husbands), producing Liza. Garland plays one of four plucky sisters (like "Little Women!"), living in St. Louis, singing songs, meeting boys, and wearing elaborate clothes. It's mean to call it corny, but, heck, it is. Two of the most famous songs that came out of this were "Have Yourself a Merry Little Christmas" and "Th e Trolley Song" ("Clang, Clang goes the trolley!). Mary Astor ("The Maltese Falcon") plays the mother. The technicolor, which Minnelli specialized in, bursts out of the screen. This 2-disc set is full of extras, none of which I watched. Also see "An American in Paris," "Cabin in the Sky," "Lust for Life," and "Guys and Dolls."

This was the first time I've watched another movie with Judy Garland besides 'the Wizard of Oz'. Everyone in this film was amazing! It was like watching a family go about their daily lives. I didn't know that the song 'have yourself a merry little Christmas' was written for this movie, or at least a scene; that was a cool thing to realize. All in all this movie is a great family film that will leave you laughing and grinning at the end!

Nice to see that by deciding to take the roll seriously, Judy Garland does come off as being very adult. A bit of a pacing issue as was the style of the day but, it's a visually beautiful period movie with a very rare and lengthy scene of what it was like to celebrate Halloween before what we know as "trick or treat" existed--someone did their research. It was interesting to hear the famous songs in context. Overall an enjoyable and entertaining movie despite the fact that they refer to themselves as "poor" several times (are you kidding me?!) and that there is a borderline annoying character--sorry Tootie!

Esther Smith: Well, how did it happen? Where did you meet?

Rose Smith: I was coming out of the shop and he was coming in. We bumped into each other!

Katie the Maid: Would it start a minor revolution in this household if dinner was served an hour early today?

Katie the Maid: Eating early on a hot day gives you more time to digest your food before retiring. Besides, I'm due at my sister's at seven o'clock on a family matter.

Mrs. Anna Smith: Is there something wrong with your sister?

Katie the Maid: She's having trouble with her husband. Him bein' a man.

Katie the Maid: Mrs. Smith, if I'm going to keep lying to your daughters, I'll have to ask for more money.

Mrs. Anna Smith: Now, remember, not a word of this to your papa. You know how he plagues the girls about their beaus.

Agnes Smith: Everybody knows but Papa?

Grandpa: Your papa's not supposed to know. It's enough we're letting him work hard every day to support the whole flock of us. He can't have everything.

Mr. Neely the Iceman: The sun oughta do her some good.

'Tootie' Smith: I suspect she won't live through the night, she has four fatal diseases.

Mr. Neely the Iceman: And it only takes one.

'Tootie' Smith: But she's going to have a beautiful funeral, in a cigar box my Papa gave me, all wrapped up in silver paper.

Mr. Neely the Iceman: That's the way to go, if you have to go.

USS_Enterprise thinks this title is suitable for All Ages

There are no summaries for this title yet.

There are no notices for this title yet.

Find it at SPPL